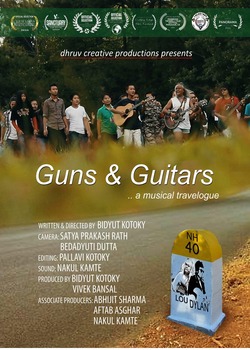 Guns and Guitars track the journey of the director Bidyut back to his root – north-east India.

The 8 northeastern states connect with the rest of the country with a mere corridor of 21 km in breath at places, but shares more than 4500 km of international borders with 5 different countries Filmed as a travelogue, this musical quest brings to light the positive influence of music emanating from the youth living in this region, which is crippled by state and non state violence for the last half a century.

The journey finally culminates on the celebratory night of 24th May with Bob Dylan’s birthday concert, organized by the legendary northeastern musician Lou Majaw for the 41st consecutive years, where all the 8 rock bands with whom we interacted earlier participate. With guitar in their hands and songs of life and hope on their lips, these youngsters are truly instrumental in changing the northeastern canvas of despair and anguish into one of hope and peace, much like how Bob Dylan operated in the America of 60s, torn by civil rights movements & Vietnam War …

Guns and Guitar was selected as one of the top 100 documentaries of 2016  by Color Tape International Film Festival – considered the largest festival of the Southern Hemisphere.

Additionally. the film has been part of the official selection of the following festivals so far

Guns and Guitar has been chosen as an Official Selection of the Indian Panorama in the International Film Festival of India (Goa) 2016 – the top international festival of this country.

Another recognition for the film comes in the form of an award on the ‘best music category’ at the prestigious Finisterra Arrabida Film Art & Tourism Festival in Portugal.