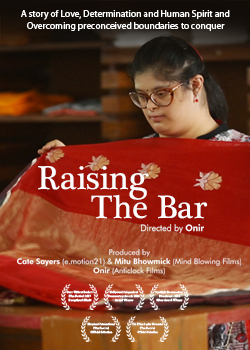 A story of love, determination and human spirit and overcoming preconceived boundaries to conquer.

Raising The Bar is a moving and inspiring documentary film by acclaimed Indian Director
Onir. It follows six incredible young people with Down syndrome who meet at the World

Down Syndrome Congress in Chennai India.

What makes this story different is it’s raw honesty into the impact love, determination and
the human spirit can have on one’s life to overcome barriers. This film extraordinary in
how it portrays the ordinariness of its heroes, and it does this with humour and at times
through challenging the audience in their subconscious bias.

With an insight into vastly different cultures and communities across two continents,
it inspires viewers to consider diversity in all of its facets, to create opportunities that
embrace difference and to see what is possible when expectations are raised and people
are given supportive environments in which they can strive and thrive.